A warm, mixed-out day in Colorado

As I mentioned in my last blog, I've recently moved to Boulder, Colorado.  While I'll continue to post about interesting weather tidbits that show up around the world (like last Friday/Saturday's storm in Seattle, which was actually rather well-forecast despite the winds not being as strong as the worst-case scenarios were advertising.  See Cliff's blog and NWS Portland's discussion for more), I'll probably switch to having a more Colorado-centric tilt to my posts.  This presents a great opportunity to explore some weather topics I haven't covered in the past, given Colorado's unique geography and associated weather variability.

I also want to get back to explaining some of the reasoning behind the weather as I understand it.  Not only does this help me really think about why the weather does what it does, but hopefully it gives you a glimpse at how I understand the weather to work.  This might be different from your perceptions, or it may be something you never thought about before, or something you understand with absolute clarity and can point out where I've messed up.  I'm trying to keep this at an in-between level, where enthusiastic meteorological novices may understand some of it, but all my professional meteorology friends may still find something interesting in reading it.  Hopefully this will be useful.  Let's see how it goes...

Sunrise was around 7:13 AM this morning, and you can see that the temperatures started rapidly rising after that time.  In fact, it rose from near 43 degrees up to 79 in about 3 hours...a 36 degree temperature change!  But then a curious thing happened: the temperature stopped rising so rapidly, despite it only being mid-morning.  In fact, over the entire rest of the morning and afternoon, it only got three degrees warmer.  This, despite the fact that we had nearly full sunshine all day.  Why didn't it keep warming up?

To answer that, we have to look at the profile of temperature in the atmosphere above.  Here's this morning's 12Z sounding from Boulder/Denver (from the University of Wyoming site):

We can clearly see that there was a very sharp inversion near the surface: a layer where the atmospheric temperature (right line) increases rapidly with height.  This means that the cooling we had overnight was confined to very close to the surface, and very warm air was only a short distance above the ground.

This explains why the temperature rose so quickly as soon as the sun came out.  As the sun starts heating the land, it causes mixing to occur---turbulent motions in the air near the surface.  These turbulent motions move air up and down.  In this case, not only was the warming land surface heating the air from below, but this mixing motion was also bringing down much warmer air from just above the surface.  No wonder the temperature quickly warmed up!

But why did it stop warming?  As the temperature near the surface continues to warm, the atmosphere becomes less and less stable.  Think of the stability of the air as the resistance of the air to vertical motion.  As we heat up the air near the surface, it becomes more likely that that air will be warmer than its surroundings and want to rise.  That rising air carries away heat with it; this is called convection.

As the surface continues to heat up, it heats the air next to the surface and that air is able to rise farther and farther up into the atmosphere---the stability decreases.  That rising air is also carrying away that heat with it.  As the convecting air currents get deeper and deeper, they're soon able to convect heat away from the surface as effectively as the surface is warming the air above it.  This makes the temperature at the surface stop rising. 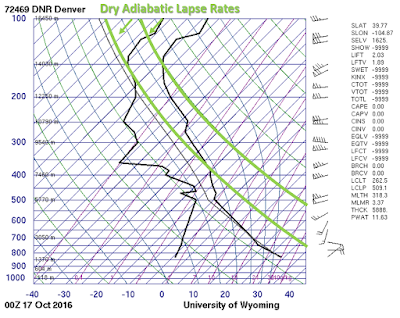 Here's another way to think about it: the depth over which the atmosphere is dry adiabatic is the depth over which those vertical motions (the air rising and sinking) can easily occur.  This means that any time the air near the surface tries to warm up in this environment, these vertical motions can convect that heat away all the way up through 500 hPa, which is some 4.4 km above the surface.  That makes it very difficult for the surface to keep warming up, since essentially for that to occur, you need the entire dry adiabatic part of the atmosphere to warm up too.  It's one thing to add enough energy to just heat up a shallow layer 100 m deep or so.  It's another whole ball game to add enough energy to heat up the bottom 4.4 km of the atmosphere.  The sun just couldn't keep up! So as soon as that shallow inversion had been heated through this morning, our lapse rate became dry adiabatic (and later, even a little superadiabatic!) down to the surface.  And just like that our warming slowed way, way down since we had to warm not just 100 m, but a full 4.4 km of air.

Another thing to mention is that with all of this vertical air motion going on (both up AND down), it makes for some very gusty winds.  As soon as that dry adiabatic lapse rate started becoming established around 10 AM, winds throughout the day ramped up and were gusting to 25-30 mph at the NCAR Foothills lab.

There's another effect that can also occur called momentum transport, where the momentum from stronger winds aloft (notice on the sounding above there are 50 knot winds at 500 hPa) can be "dragged down" by these vertical motions to the surface.  All in all it made for a very gusty day.

The NWS forecast for tomorrow has a red flag warning for fire weather danger, but temperatures are a bit cooler: 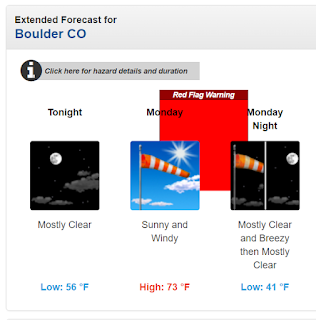 The gusty winds are a hint that we're probably going to end up mixing-out again in the afternoon.  But why the cooler temperatures?  Let's check the 700 hPa temperatures now and the forecast for tomorrow afternoon from the GFS (as plotted by Pivotal Weather).  Here's this evening's 700 hPa analysis: 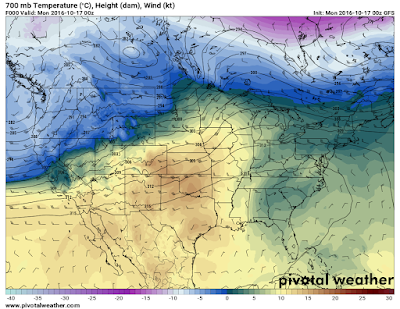 The temperatures at 700 hPa are about 15 Celsius over Boulder this evening.  Here's the forecast for tomorrow afternoon (18Z): 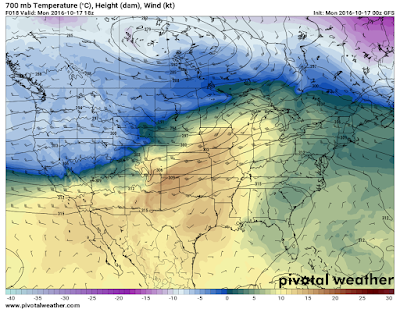 You'll notice that a pool of colder temperatures to the west (associated with a very broad, approaching upper-level trough) are sliding eastward.  The 700 hPa temperature are forecast to be closer to 10 Celsius tomorrow afternoon.  If the air gets colder aloft, then the surface temperatures won't have to warm up as much before the lapse rate hits that dry adiabatic threshold and the near-surface warming slows way down.  Thus, our high temperature forecast tomorrow is lower than for today, even with the same basic process at work.

Another thing you'll notice is that there's a sharp gradient in those 700 hPa temperatures.  You might even think of this as a "front" in the air aloft.  Strong temperature gradients at lower levels promote strong winds above (though something called the thermal wind).  We can check the wind forecasts at a higher altitude, say 500 hPa: 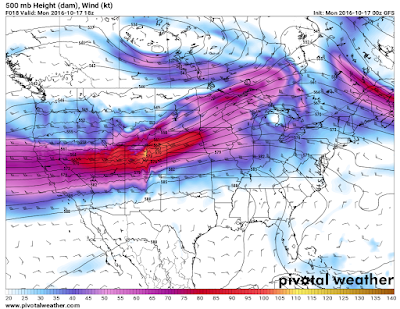 Sure enough, there is a jet at 500hPa right over Colorado.  We now have everything we need to explain the forecast for tomorrow:


So there's a bit of fun atmospheric thermodynamic diagnosis going into tomorrow's forecast.  Hope you enjoyed it.  I know my bike ride back from work is going to be a struggle against the wind...

Posted by Luke Madaus at 9:24 PM No comments:

Luke Madaus
Seattle, WA, United States
Completed graduate school at the University of Washington, now a postdoctoral researcher at NCAR in Boulder. The thoughts and opinions expressed on this blog are solely those of the author and are do not necessarily represent the positions of NCAR. Email me at lukemweather@gmail.com. http://www.midlatitude.com/lukemadaus

A blog for the weather enthusiast or meteorologist with a little more technical slant on describing the weather.